by u.s.s.sovereign
Hello! I'm the starship specialist in the Russian Star Trek Fan Society and a team member of Star Trek: Defence Line game development project. Our project is under development for about a couple of years and we have made a lot since we started.
ST: Defence Line is a new Star Trek RTS on the Unity 3D engine (v.5). It is a successor of Star Trek: Armada series tradition and we are trying to develop the ideas of Armada to make gameplay more realistic and interesting.

Now we're searching for a starship texture makers and 3D modellers. Your help will make the game be ready earlier. 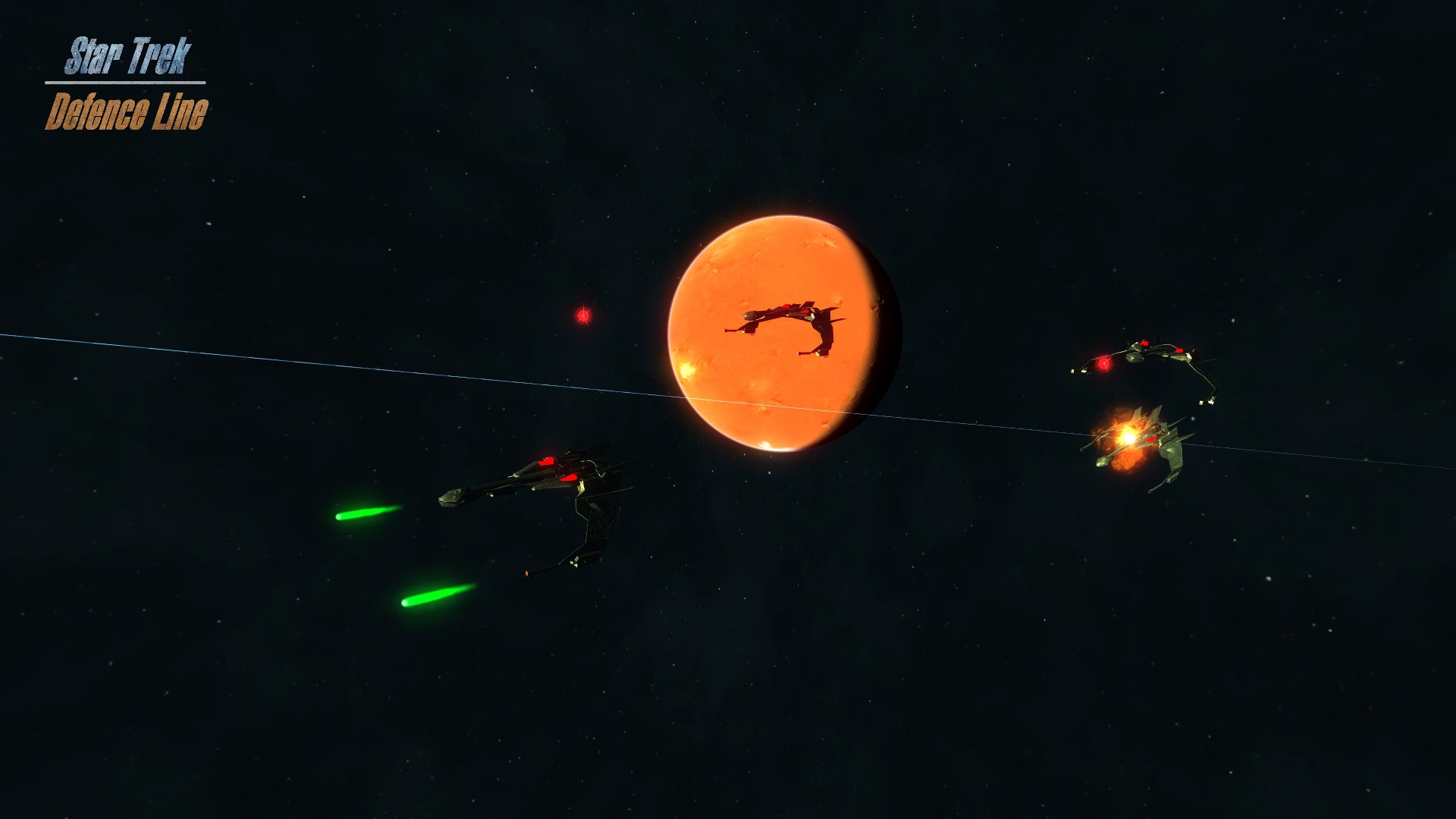 We have solved some critical errors. Now all systems work fine and we have something for you to try.
This is an example battle for ships’ physics tests. In this combat, the Federation fleet will try to recapture a planet, captured by the Borg. The flagship is USS SOVEREIGN. In the centre of the map you can see the debris of the Federation base. The Collective forces consists of assimilated Starfleet ships and a cube. First of all we advise you to destroy the cube.

The Pause Menu is under reconstruction, so it doesn’t work. If you can hear no sounds or music press F5. To exit the test press Alt + F4. 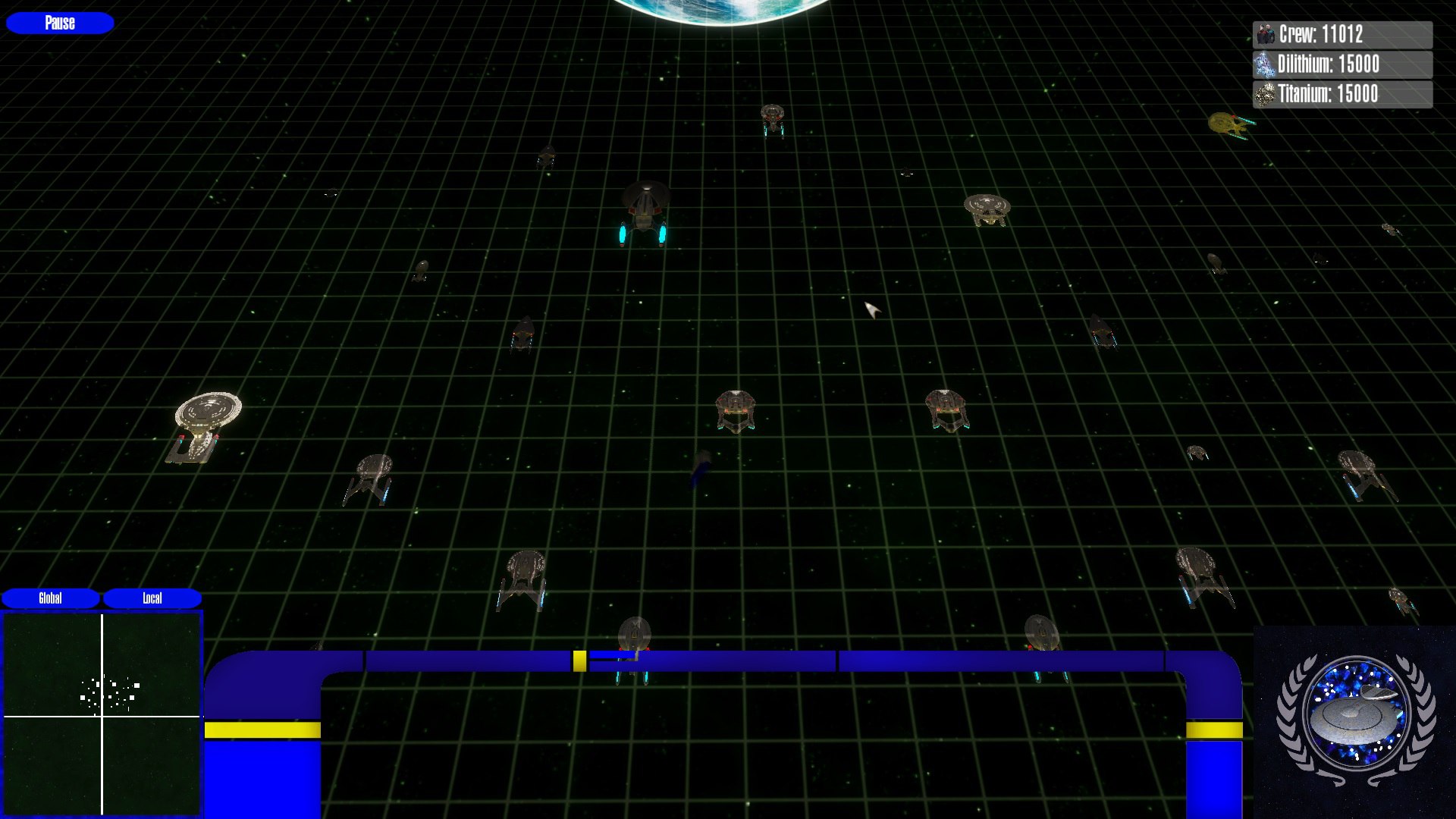 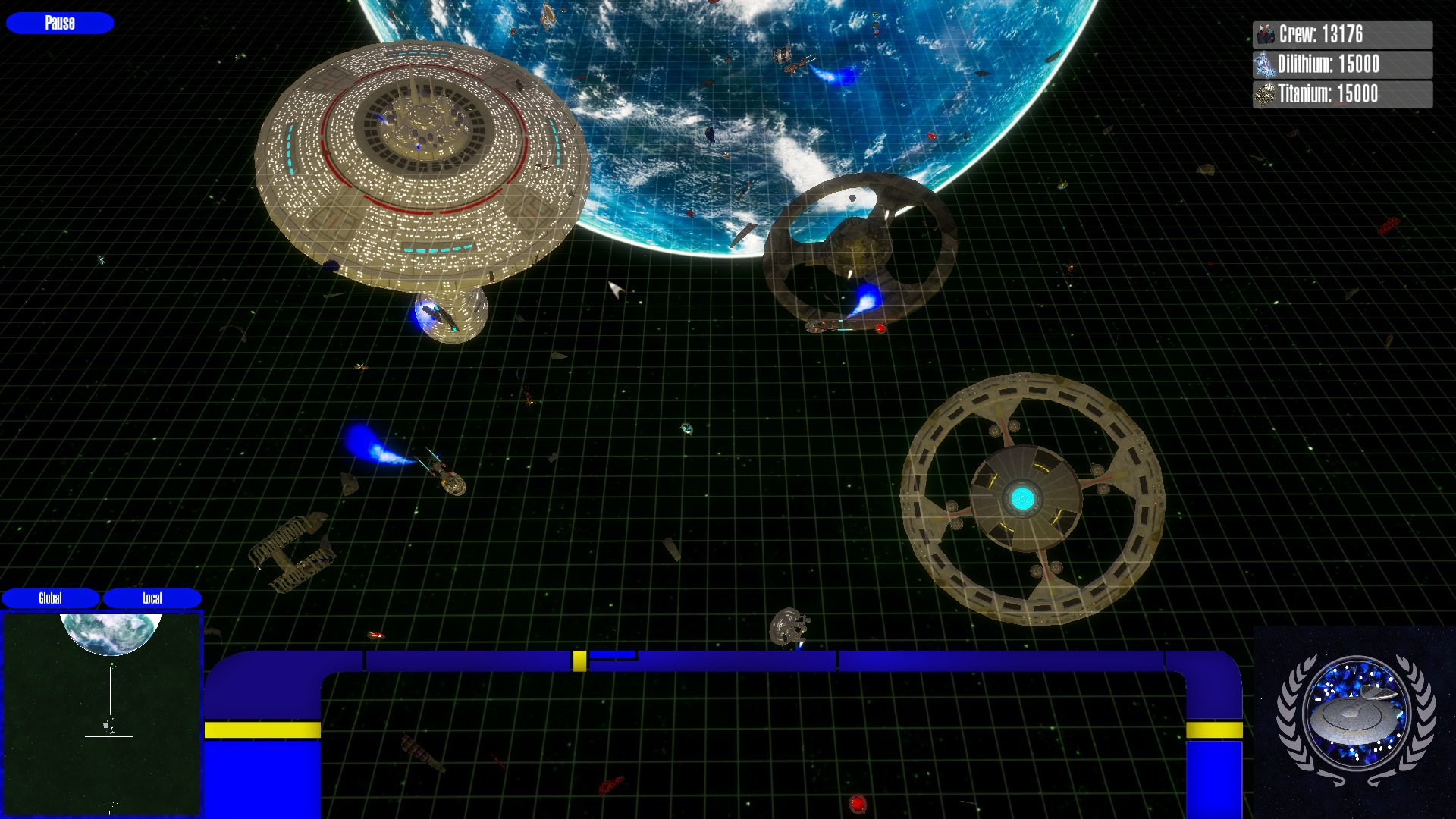 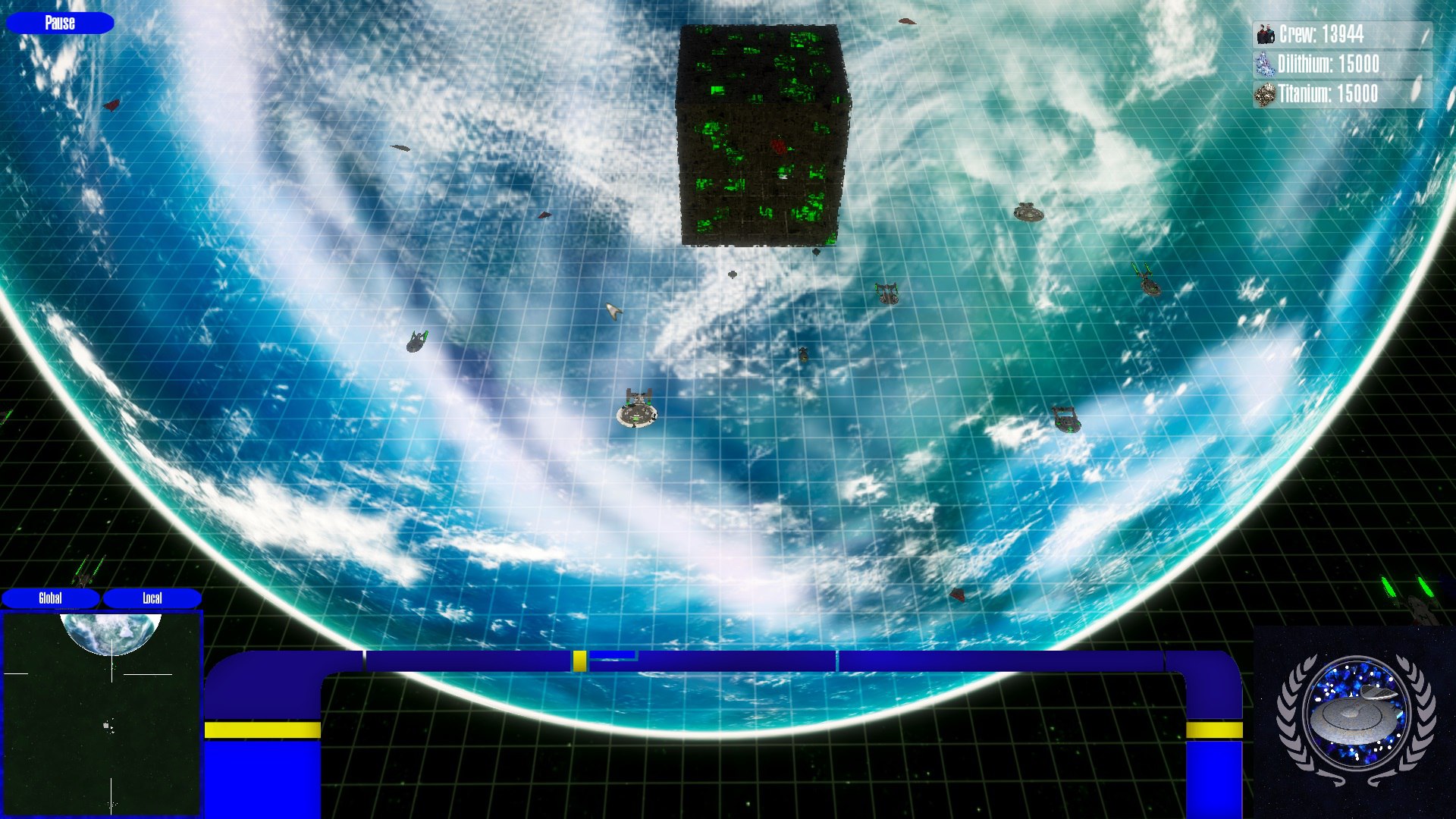 by Erik_Timmermans
Finally got around to trying it, great work!

The mechanics seem to be working well, I was intuitively able to control the fleet and I also managed to destroy all Collective vessels 8)
The ships look good in the engine, especially zoomed in. Also the planet makes for a nice view.

I wasn't able to make it crash, impressive! It's a lot of work getting something like this to function properly.

The mechanics seem to be working well, I was intuitively able to control the fleet and I also managed to destroy all Collective vessels 8)
The ships look good in the engine, especially zoomed in. Also the planet makes for a nice view.

I wasn't able to make it crash, impressive! It's a lot of work getting something like this to function properly.

We're very glad that you found the test version good. We're working on the other gameplay elements and ships' subsystems. by u.s.s.sovereign
Hello, everyone! We have been silent for a while. Here is some news:

1. All the starships' subsystems are now finished;

2. We have already showed you tractor beam. We have upgraded the effect now;

3. Assimilation and damage effect for stations is completed;

4. New stations selection effect is done. The contour is coloured with the player's colour;

5. Thanks to TUB_Husker, we have a new great model of advanced drydock. Wonderful work, TUB_Husker. Your models are great!

6. The sensors and weapons range visualization in now completed (green and red circles around selected object). Player can hang the cursor over the station or a ship to see the ranges;

7. Weapons system is completely remade. The new system let the ships have more than three phasers. Now the quantity is unlimited. The same with torpedoes;

8. The starbase is now armed and able to open the fire;

A couple of screens: 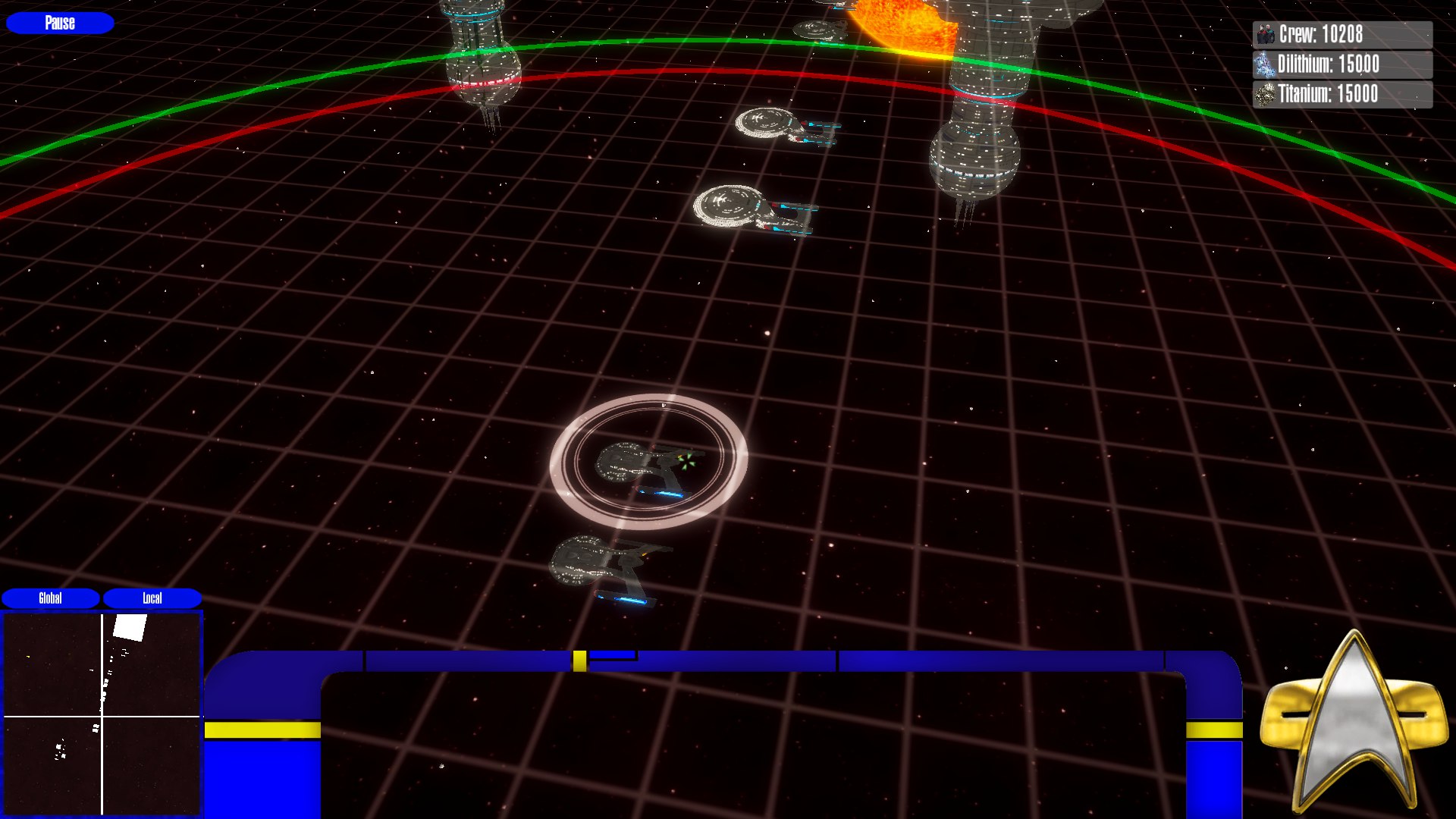 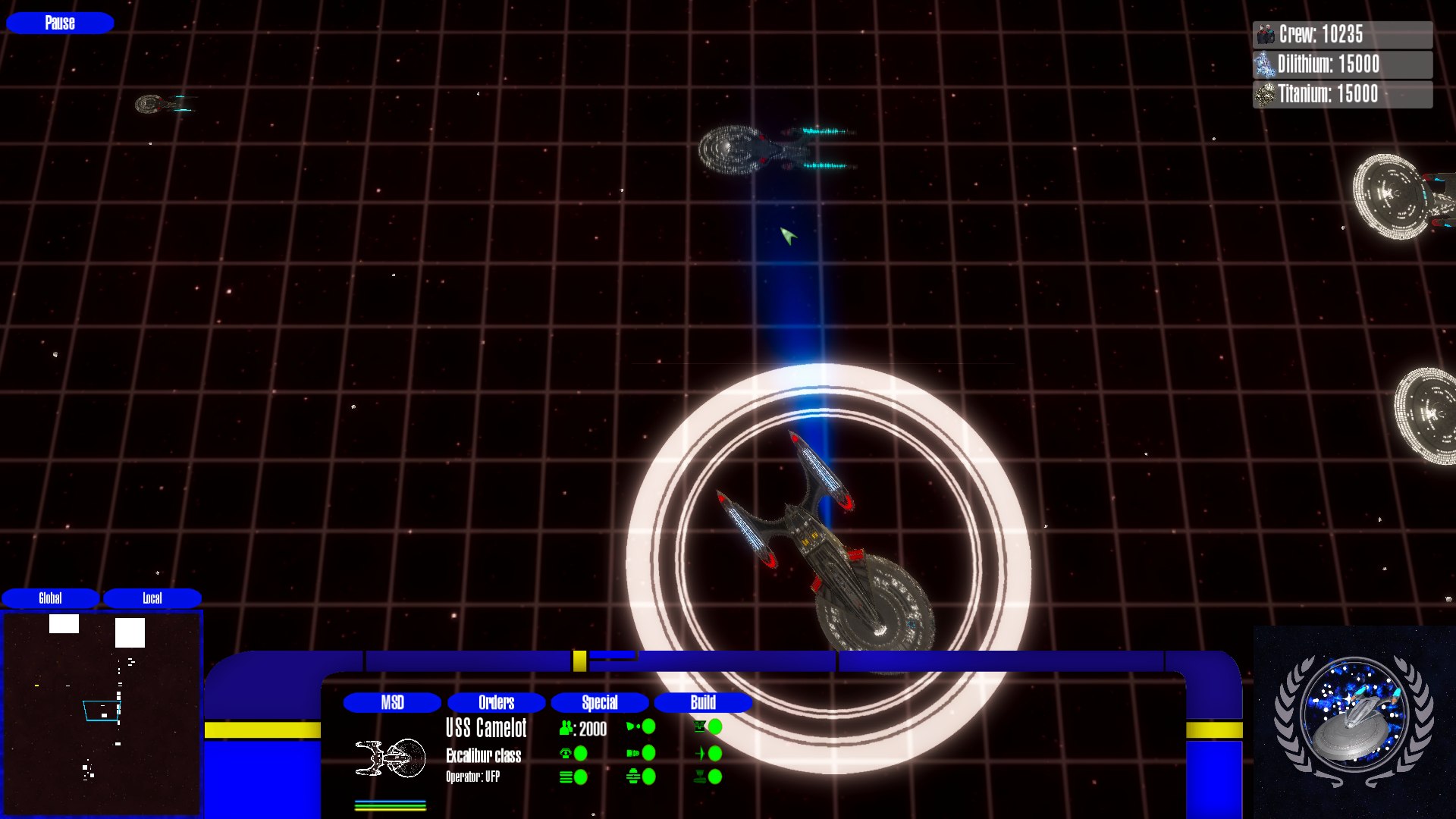 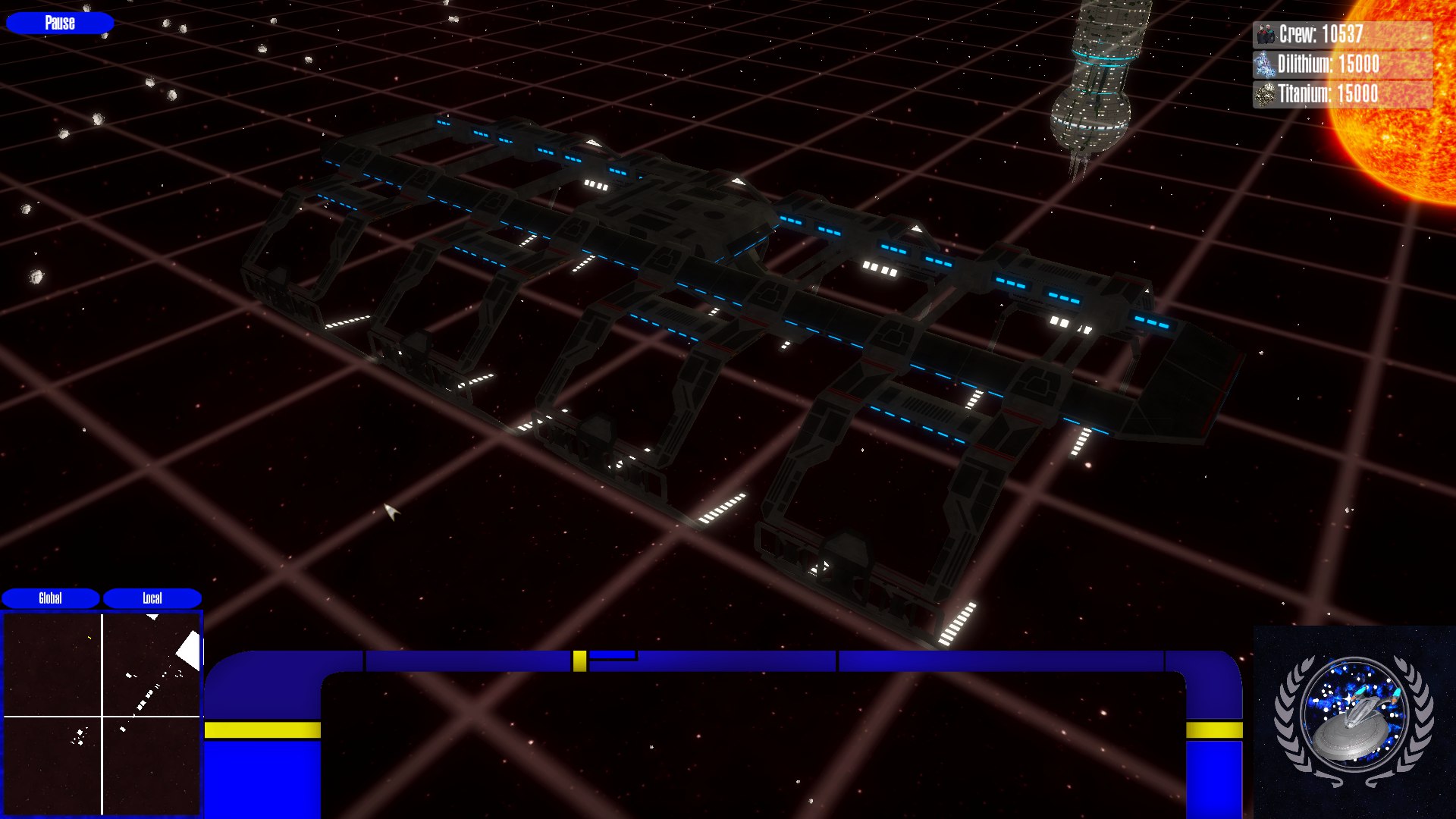 by u.s.s.sovereign
Sovereign class in the atmosphere of a gas giant 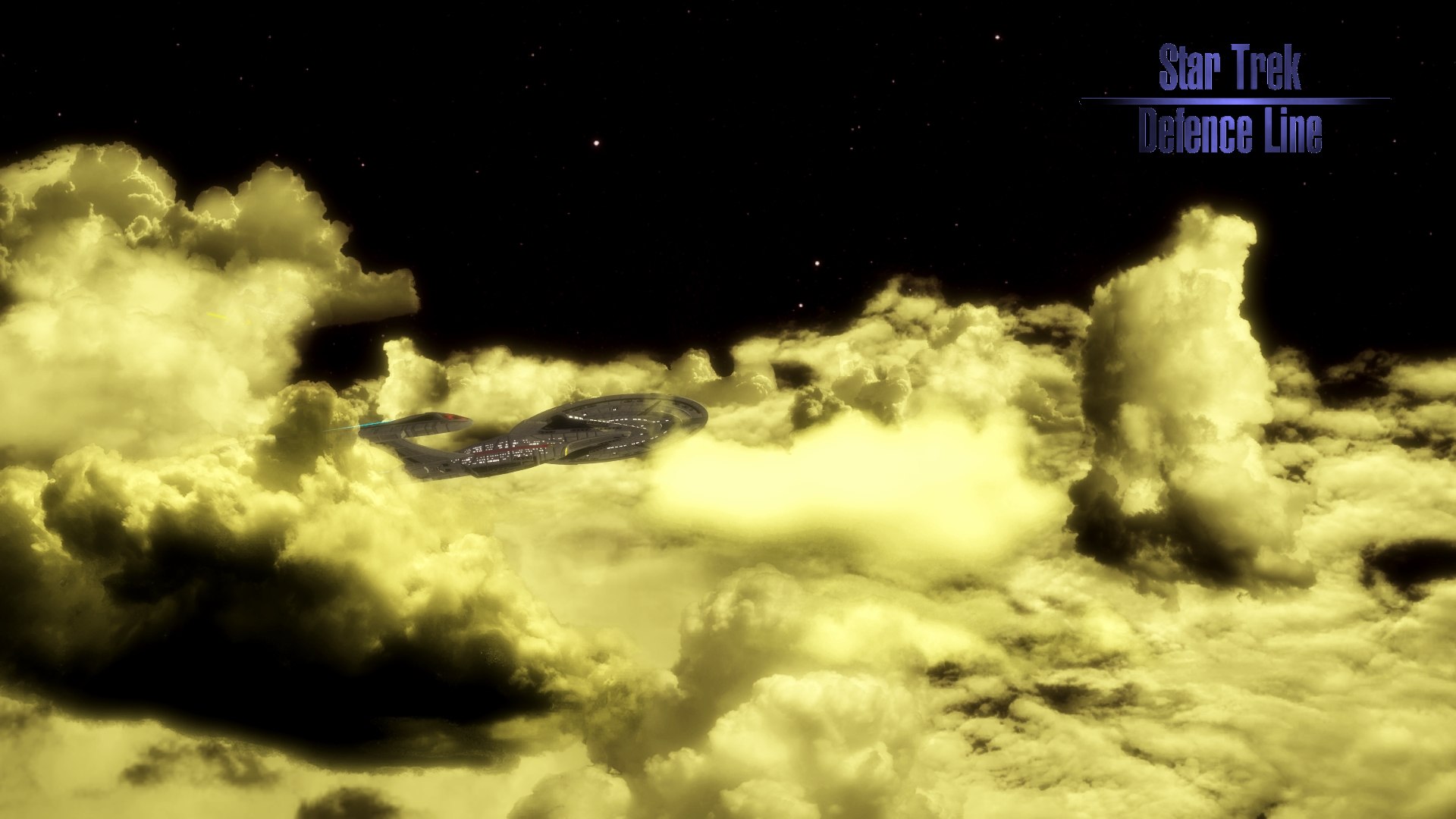 by Erik_Timmermans
It's impressive what you're achieving with what I expect to be limited resources! Love the shots, nice to see in game footage looking like that!

by u.s.s.sovereign
We haven’t written for a while. Here are things we were working on during last months:

1) The Attack order is now available and ships can attack even friendly targets at command.
2) The Protect order builds ships in a protective formation around the target to protect.
3) The Self-destruct sequence could be canceled now. A player has five seconds to change his mind and not to ruin the ship (the button is highlighted) 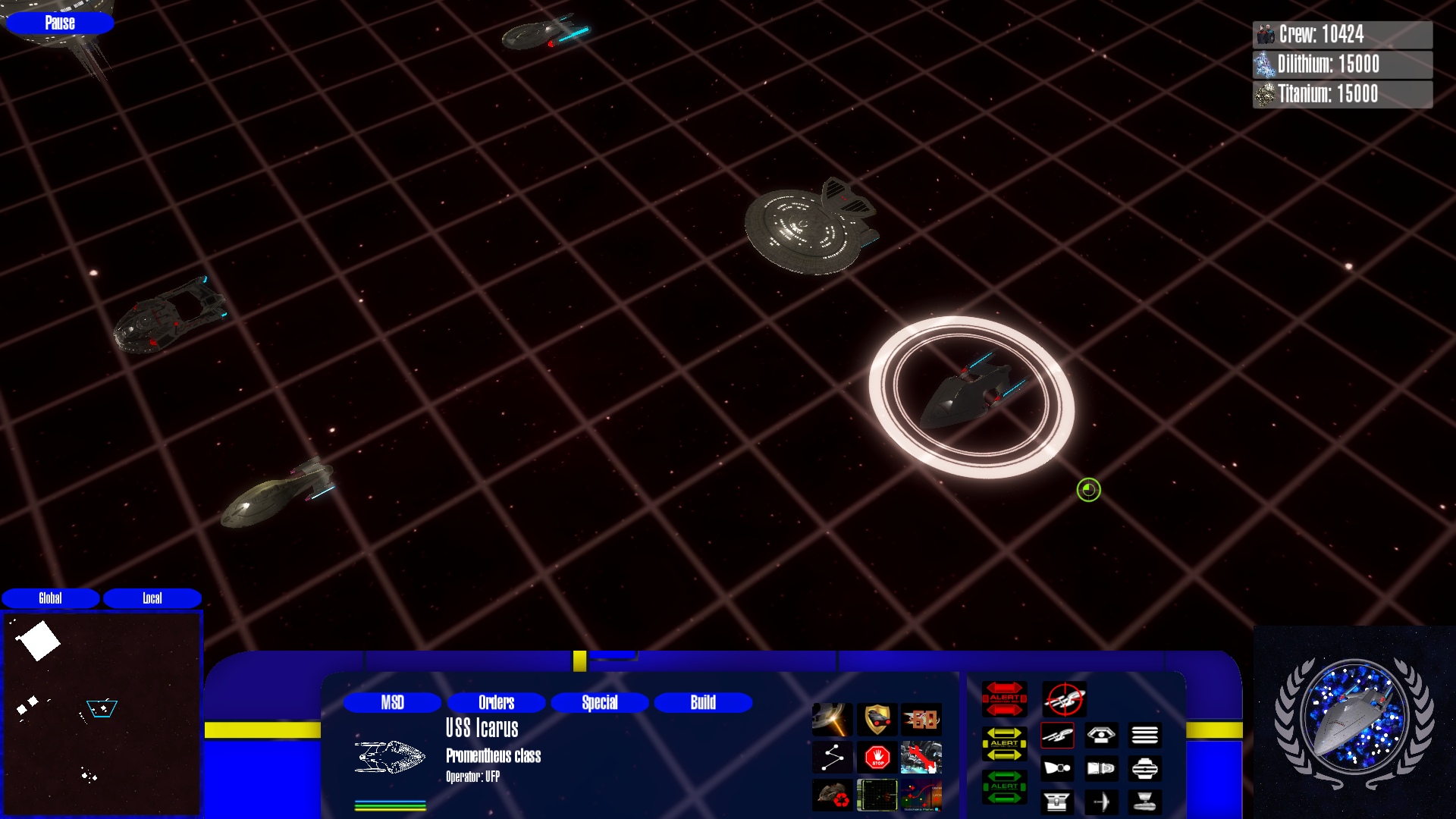 4) Now it is possible to order ships to patrol the area. There is a button in the Orders Menu or player can press Shift+Click to set waypoints. The set waypoints are visible only if the ship is selected.
5) The Stop order cancels any other commands to the ship.
6) The fleet now moves at the slowest vessel’s speed to make all ships move at the same velocity. This function is needed not to have your small ships destroyed by the defence line of enemy base while your big ships are still moving to the battlefield.
7) The ships create queue to the place where they could be repaired while the dock is already busy.
8) The Engine System is reconstructed again. Now the ships act more realistic.
9) Cursors are replaced with new ones.
10) We have upgraded our Unity 3D to the 2018 version. Because of this upgrade, our celestial bodies were broken down and we had to replace the whole module and remake all planets, stars and other space environments. 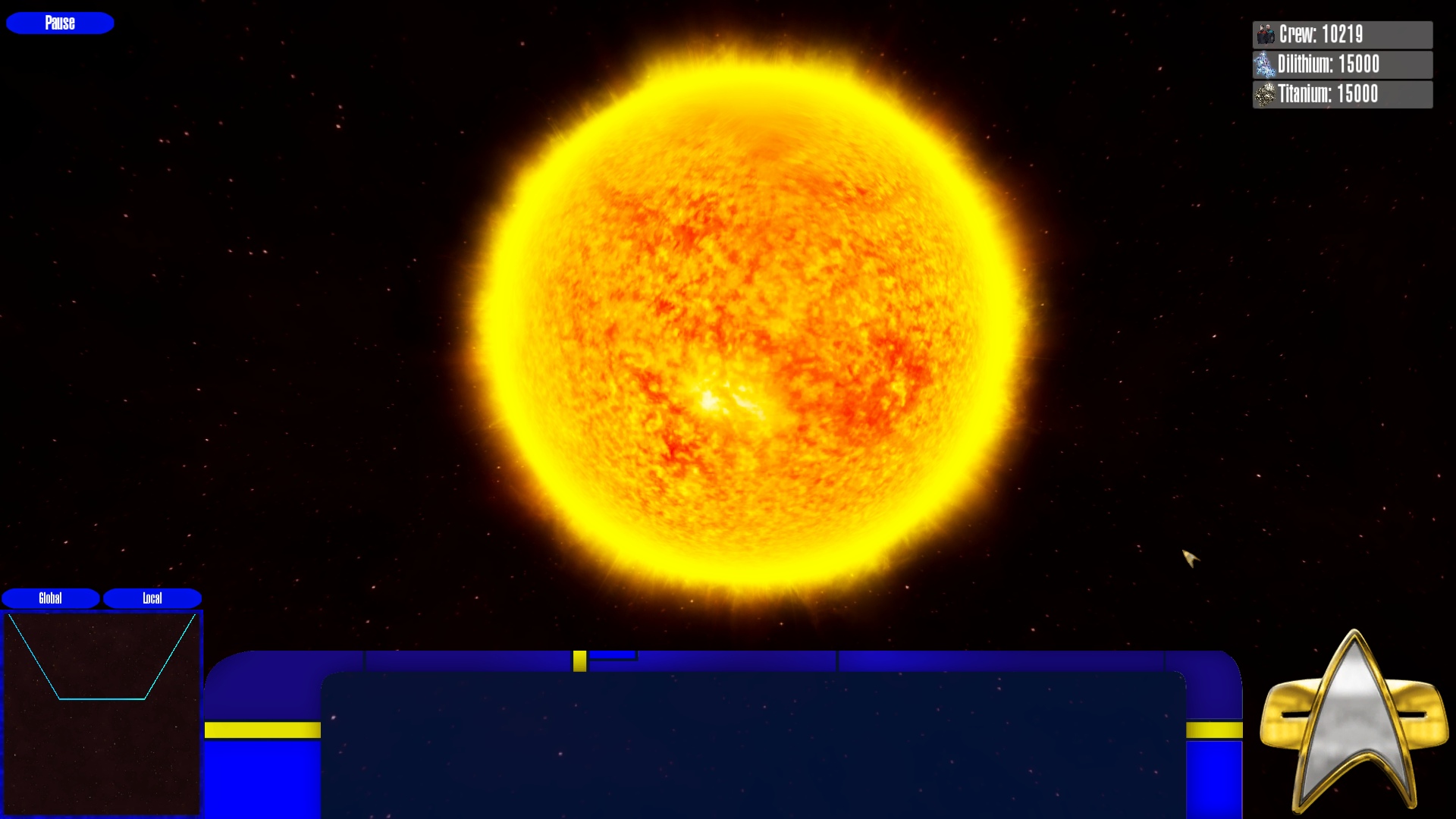 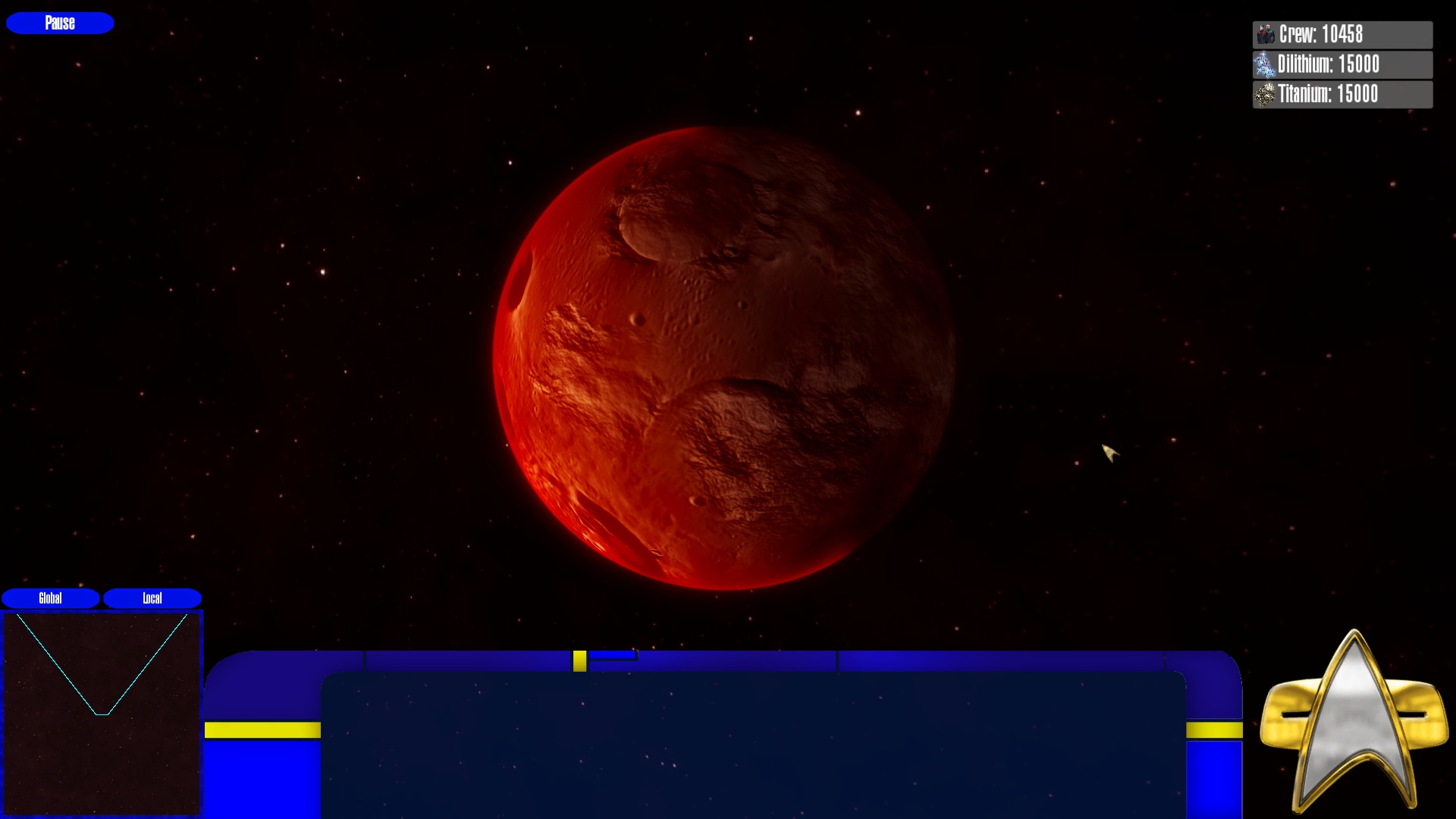 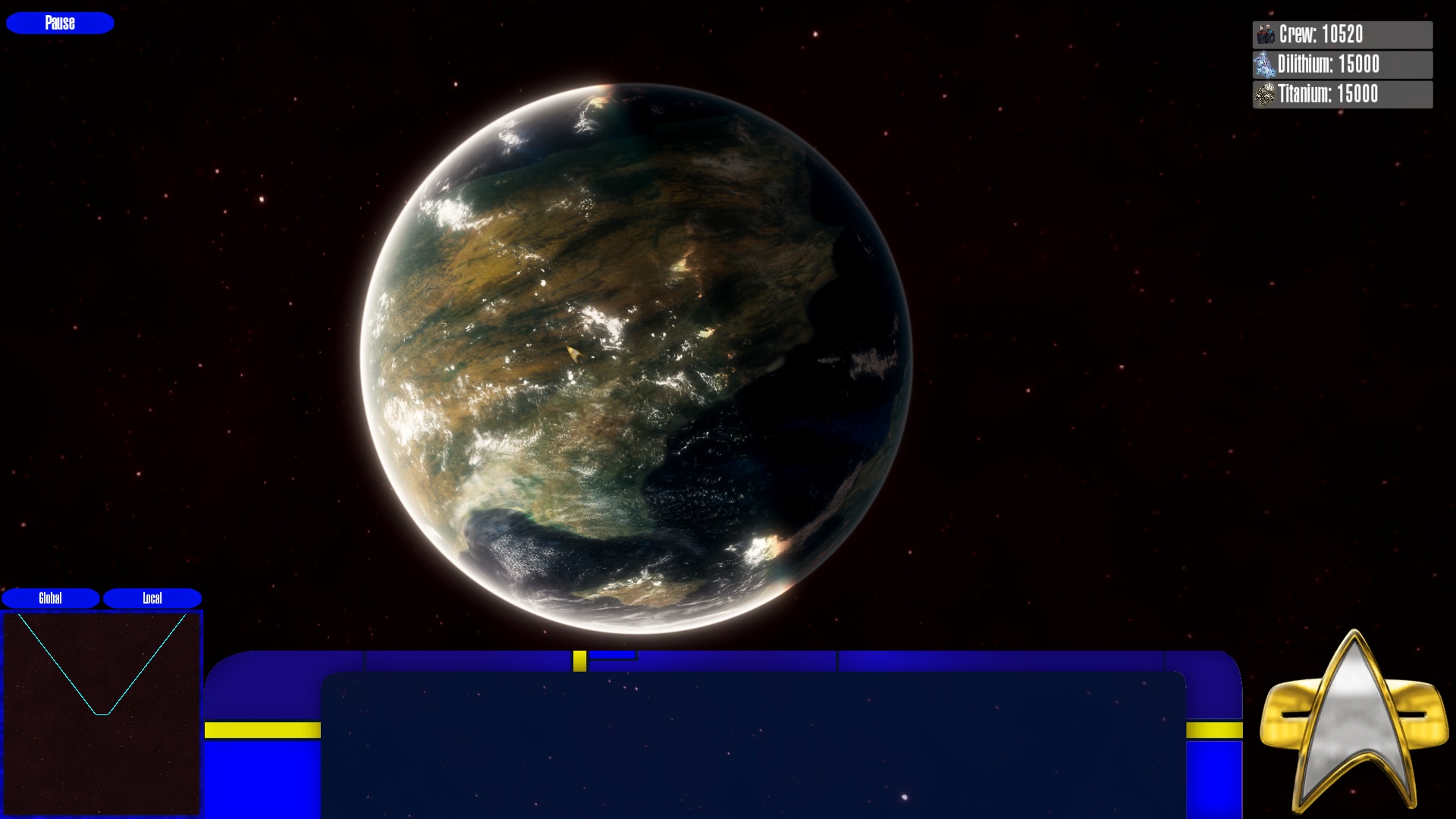 In the meantime, we celebrate Defence Line’s birthday, as it is 3-years-and-2-days old. Here is a wallpaper as a small present to you. 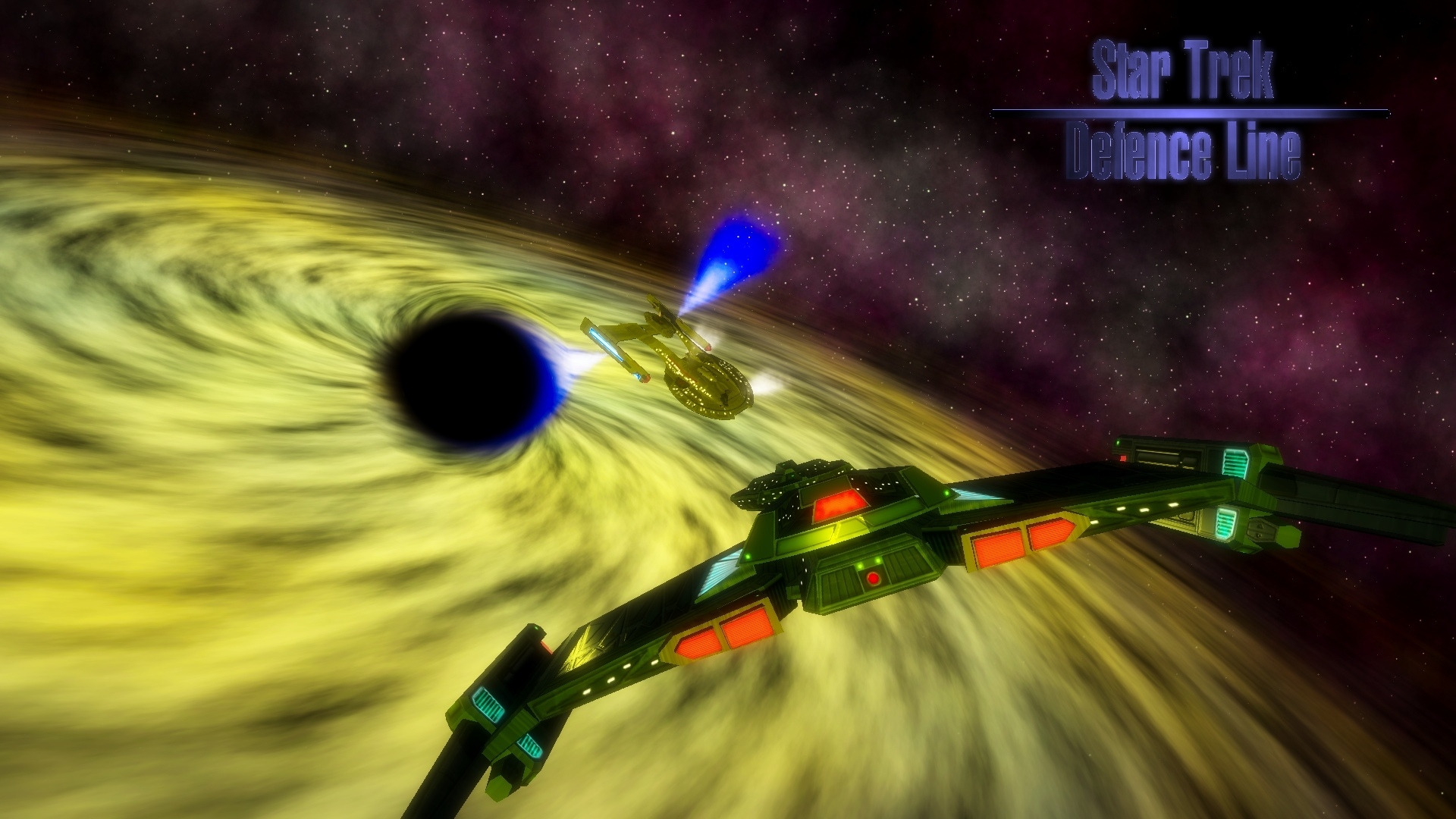 By the way, thanks to Don Woligroski (Cleeve) for his permission to use his models in our project. You can see his Klingon K'vek-class vessel on the wallpaper. Akira-class is by our friend and colleague TUB_Husker.

by Handyman4545
The Akyazi class, Braga will shortly be available for purchase in high resolution, 3D on Turbosquid.
The same vessel in low rez, suitable for gaming can be ordered through me.
I can customize the registry as needed.

Today our project celebrates its 4-year anniversary since the beginning of work. We're still alive, though a lot of game modules had to be rebuilt. Thanks to unexpected reinforcement we finally managed to finish a workable engines module. It causes no bugs. The work is going on. 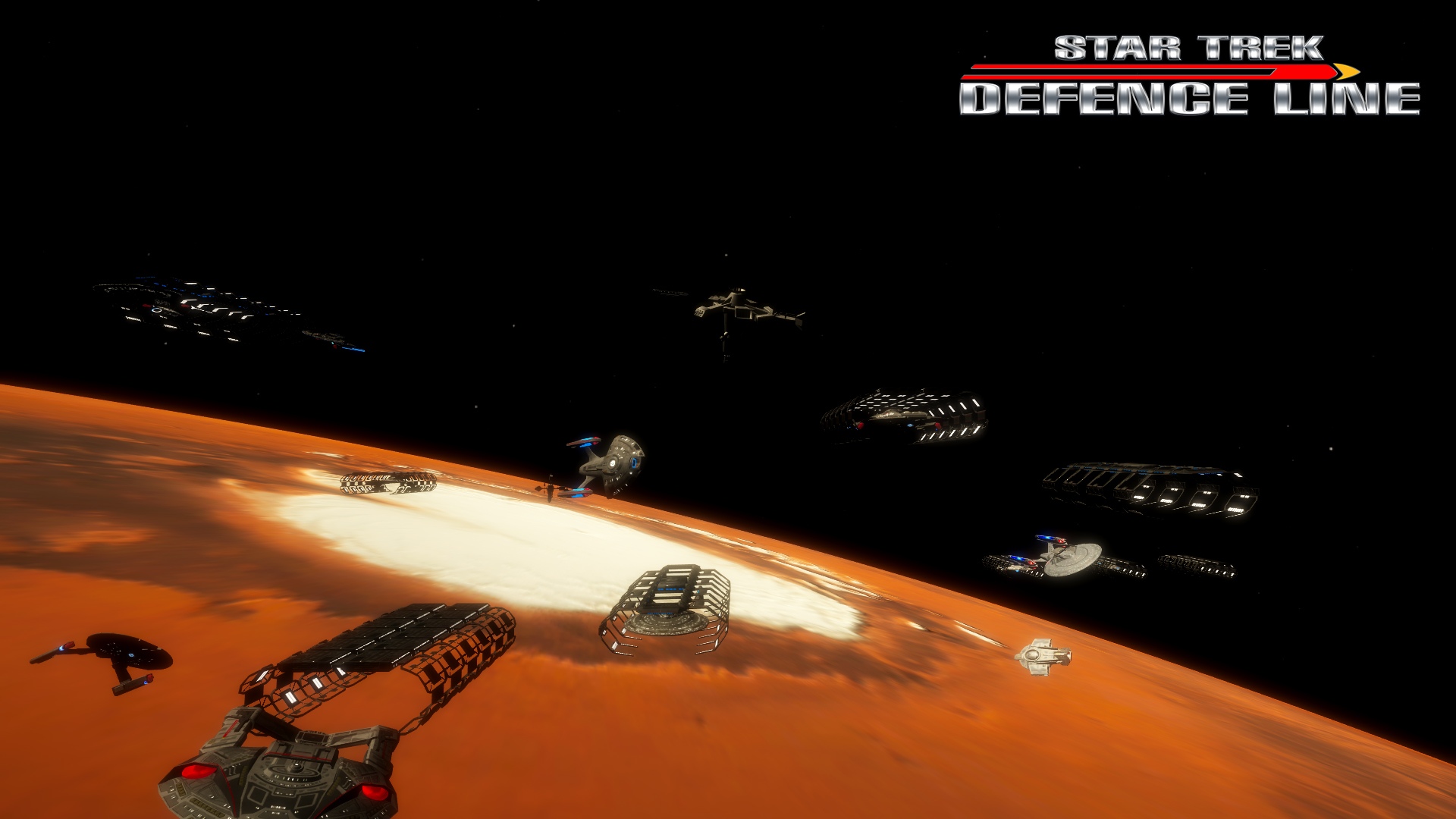