by dialNforNinja
So in LD e5 we see the Vancouver, and as with most Miranda-style designs she is a very pretty ship. I took some screen shots of the MSD and stitched them together to have a complete frame, with only the spot where I had to edit out fake-Burnham using the poorer-contrast and blurrier version: 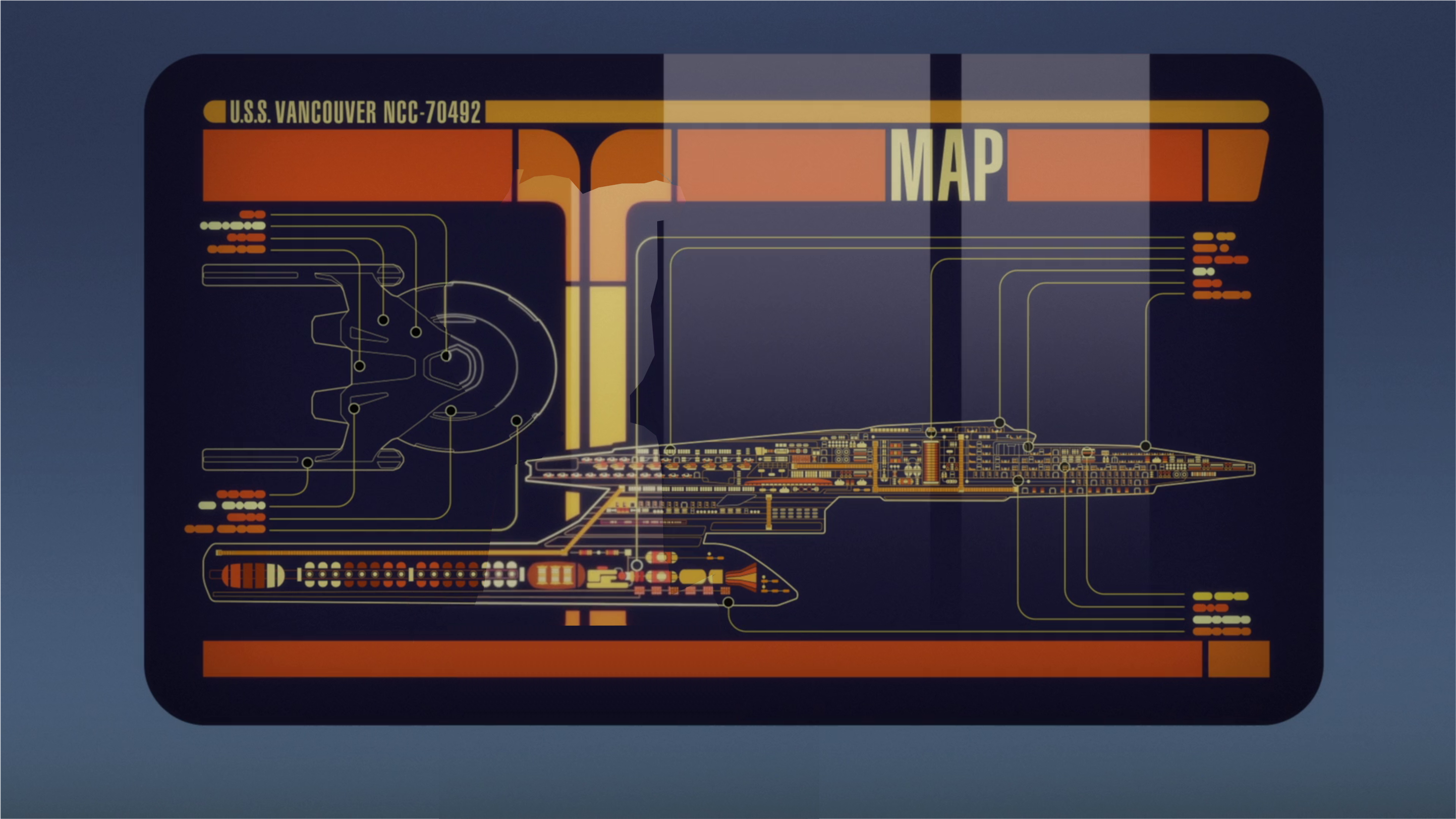 Unfortunately, this doesn't include some of the traditional major elements like the warp core, main plasma conduits to the nacelles, or Astrometrics hemisphere, though it does show that the bridge appears to be on Deck 2 with a pair of conference rooms on Deck 1. Unfortunately, it also seems to be siting the shuttle bays inside the impulse engines as well - compare the MSD above to this aft image: 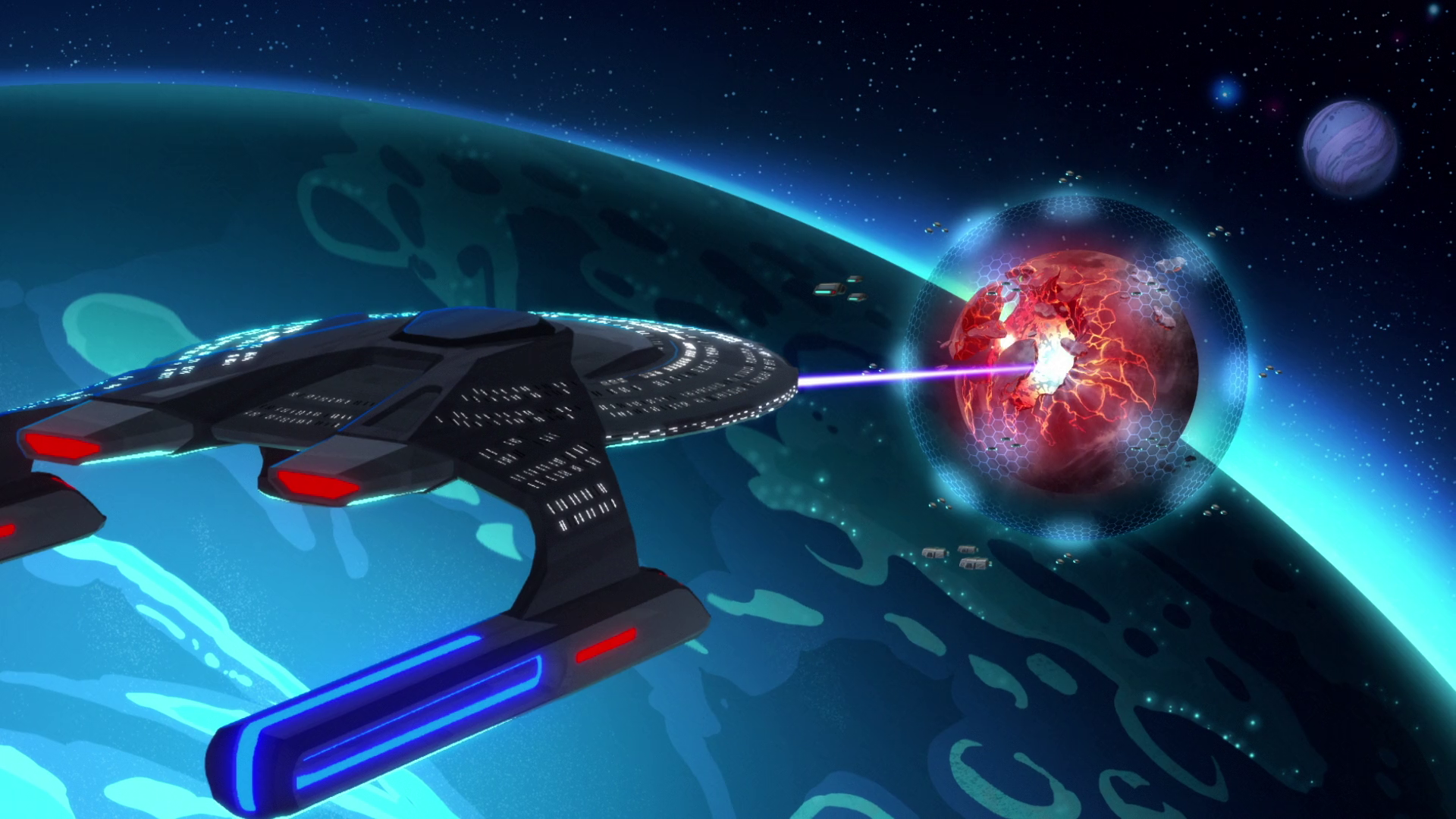 the shuttle bay the characters are shown disembarking in doesn't match up very well either, unless perhaps they're way in at the forward end, where the MSD has three little white features at different heights in the floor-level deck. 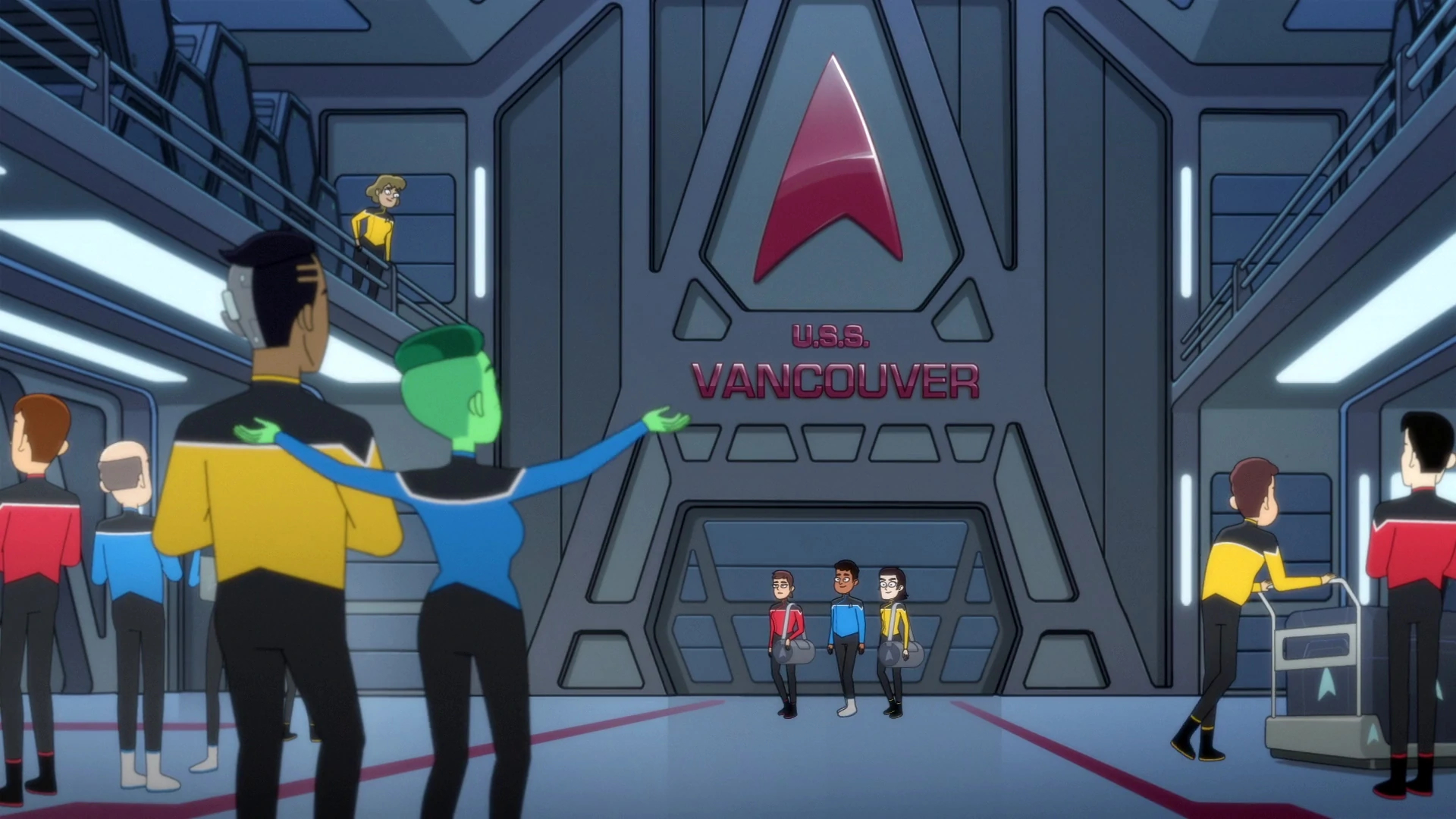 I didn't take a screen shot of the view looking backward out the bay door, but it didn't look like it stretched quite that far, past rows of a dozen shuttles. Then again, having the shuttle bay size and location line up poorly with the outside of the ship is hardly unique in Trek.

I'd be inclined to move the impulse engines to the center of the rear of the saucer and keep the shuttle bays in the two tail extensions to preserve the bay size shown, but the reverse could also work. What do folks think here?

(Let's just leave the issue of general show quality aside, I'm only interested in the ship for the nonce.)

by dialNforNinja
Continuing to think it over, I think the thing to do is to just shorten the bay and put it between the impulse engines, if only because they're very noticeably located in the aft extensions while the saucer rim at the back is dark, which could just be a closed bay door. They were also on screen from multiple angles for several seconds while the MSD is barely shown long enough to register details, in the background as characters are talking. I probably will also thicken that rim so as to get a decent height for the bay, but that's a minor consideration. Pretty definitely going to give making a model a shot, the more I look at the ship the more I love it, and just doing the outside and a shuttle bay cavity is simple enough I should actually be able to finish the thing for once, rather than getting caught up in details until a new shiny object catches my attention. She needs some phaser strips too, though there is are least convenient gaps in the bands of windows to add those, and torpedo tubes can go in the front cutout beside the moon-destroying doom laser and the back end of the deflector dish dongle.

by Erik_Timmermans
I think you're right, the saucer rim seems to have the perfect place for it (logical anyway). It would be nice to have a huge door, spanning from impulse engine root to root, but that'd be too wide to match the design I guess. Two doors side-by-side could work... aesthetically. anyway

It's hard not to get stuck (literally) in the details, whether it's designing a ship, software, a house, anything