by dialNforNinja
While playing around with my collection of interesting-looking parts that didn't get used in the model I was making at the time, I slapped together a starship just for giggles. But it looked SOOO slick! So I made a few more parts specifically for the purpose.... then rearranged them into some other hull styles... and then made them silver and gold instead of white and black, because they couldn't be more Art Deco if Jean Després had designed them himself.

Note, that part where the ship flies down for a close up and spins around to fly back out of the top of the screen? It looks horrible and makes people dizzy. Never do that. The correct shot would be to have all the ships fly in at the top of the screen and off camera in the same direction, then cut to another angle to have them fly in from the side and out the other, and only then, still going on a diagonal that follows the same horizontal direction as the previous two shots, in from below and out the top to show the aft aspect.

But this has already been rendered so we're all stuck with it as it is. After I make the other four or five configurations I thought about adding while sitting and watching Blender work, I'll do that with the next one.

I am in fact intending to give these texture maps (diffuse, specular, bump and glow) for windows and a hull plate Aztec pattern, probably redo the secondary hull for the Fakecelsior and Fakurry, flipped/quad nacelles for the Fakeranda and Fakira, and already have the saucer cut into segments (as well as two, three, and four slice segments without dividing lines cutting across them) and a few special segments with a pyramid complex that could be weird tech gadgets or VIP resort accommodations, a bunch of cylinders that could be material storage or on a bigger ship residential towers, and a couple of domes that could be liquid tanks or, again, extra habitable space, with underslung shuttle bays on the pyramids and cylinder segments. There's two thicker saucers as well, one that has a flat underside and another that's just a slab-sided disk except for a couple of bevels at the rim, and while not done yet I have plans for doing some (working) cargo/shuttle bay doors, segments with TOS and TNG phasers, one for an xtra-smol single-deck version (too small for proper spelling!) with a single-segment that detaches directly as a shuttlecraft, possibly something that transforms in an unnecessarily elaborate fashion into an attack ship ala the Prometheus' MVAM only even more cool and impractical, and (I'm really attached to this one) a three-segment XL section that splits and opens up into a mobile drydock like the spider-arms one in TNG

Oh, yeah, and multiple sizes for at least Fakeranda and Fakira, because the debates over the actual size of the Akira were just so much fun.

And some better class names, even if it's just drawing a thin veil over it, like Excellent, Courageous, Reliable, and, uh, I dunno, Tetsuo? Kaneda? Canada? Axolotl? Accolade! Yes, silver saucer sister #4 is now Accolade class. 'Cause she's an elegant acco-lady and you'd better remember it if you don't want a photon torpedo sandwich! Also the only one with a removable segment directly aft instead of that being where the bridge/hub connects to the drive section, making her the prime candidate to be xtra-smol like a teeny tiny bean.

Whether all that happens though, or at least before I run out of enthusiasm for a while and go back to mostly reading fanfiction like I ususally do, is somewhat in question. In the interests of maintaining the necessary amount of excitement, would anyone actually be interested in some of these if they were available?

They're a little low-poly for more than filling out fleet scenes or in the background for a space station at the moment though only the tips of the nacelles really noticeably have sharp points (all four of the ships together are under 50k triangles!) but that much is easy to fix, and like I said the overall shapes are really sleek and (at least I think) beautiful. Of course, being able to throw a whole fleet on the screen and not take hours to render per frame has benefits of its own. I honestly have no idea how people like Mark Kingsnorth make those super-detailed models, this is me intentionally using lots of geometry... but then, my habits were formed working on a Mac Plus with a whopping MEGABYTE of RAM and a huge 20mb hard drive, adding and moving one vertex at a time, and if you got up to a thousand triangles that was pretty big, you know? 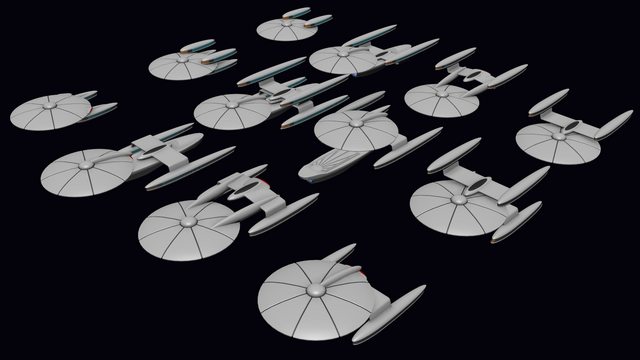 I lost a couple days to watching TNG and DS9 episodes (ahem) "for reference material."

Nacelles-down could be Rapid, but dunno for the other two
* improved nacelle shapes all around
* flipped and doubled nacelles for more variations
* modified Akira-likes' rollbars so the aft center saucer wedge can actually be removed without smacking into them
* NOT making any more ships until the existing parts are textured
* proper Starfleet white and black, no matter how cool the chrome and gold looked
* napkin sketches for all the saucer wedges & only two complicated ones left, the rest are shuttle/cargo bays and their doors
* learned to use new stuff in Blender
* actually feeling tired, maybe I'll beat the insomnia for once?
All times are UTC+02:00
Page 1 of 1